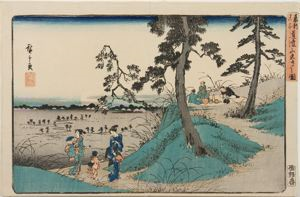 
Keywords Click a term to view the records with the same keyword
This object has the following keywords:
Asian*, color woodcuts*, Japanese*, landscapes, meisho-e*, Ukiyo-e*, woodcuts*
Exhibition List
This object was included in the following exhibitions:
Portfolio List Click a portfolio name to view all the objects in that portfolio
This object is a member of the following portfolios:

Your current search criteria is: Object is "Listening to Crickets at DÃ´kan Hill (DÃ´kan-yama mushi-kiki no zu), from the series Famous Places in the Eastern Capital (TÃ´to meisho)".