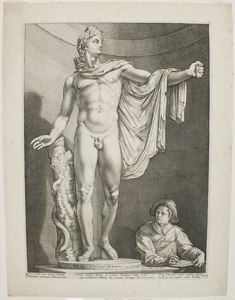 
Goltzius is regarded as the consummate Dutch Mannerist printer, known for his prints depicting antique sculpture, such this engraving of the Apollo Belvedere. Prior to photography, prints like this one were the primary way that people experienced ancient art. The Apollo Belvedere, a Roman sculpture that was once thought to be a copy of a Greek bronze of the 4th century BCE, was excavated in Italy by the 15th century and soon became a model for Renaissance artists striving for the ideal male form.