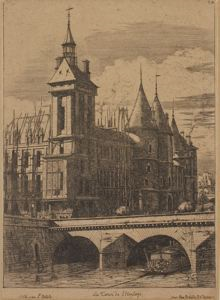 This print depicting the clock tower of the Palais de Justice (Courthouse) is a composite of two separate perspectives, which Meryon combined to produce a view that he found more aesthetically satisfying than any one âtrueâ perspective of the building. The etching hung in the Blue Room of the Deanery along with other prints from the same series and etchings of the American artist, James McNeill Whistler.