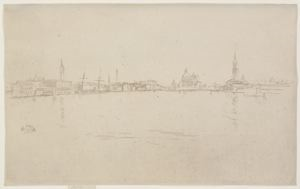 "Salute: Dawn" is a panoramic view of the city of Venice, including the church of Santa Maria della Salute, from across an expanse of water. San Marco and several bell towers, as well as a gondola and a sailing ship, can also be seen in the image. Whistler produced several etchings depicting the same subject at different times of the day. His characteristic signature â a monogram of his initials within an abstract butterfly â appears at the left. The print hung in the Blue Room of the Deanery along with other etchings by Whistler and several works of the French master, Charles Meryon.


Keywords Click a term to view the records with the same keyword
This object has the following keywords:
cityscapes, townscapes, and village scenes, etchings*, seascapes and water scenes
Exhibition List
This object was included in the following exhibitions:
Bibliography List
The following Bibliography exist for this object:
Related Object(s) Click a record to view

Your current search criteria is: Object is "La Salute: Dawn".