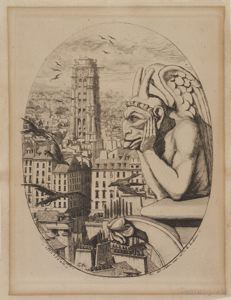 "Le Stryge," or The Vampire, depicts a gargoyle on the Notre Dame Cathedral overlooking the streets of Paris. Standing prominently in the background is the Tour Saint-Jacques, the tower of a sixteenth-century church that was destroyed shortly after the French Revolution. This etching hung in the Blue Room of the Deanery along with other prints from the same series and etchings of the American artist, James McNeill Whistler.

Your current search criteria is: Object is "Le Stryge".