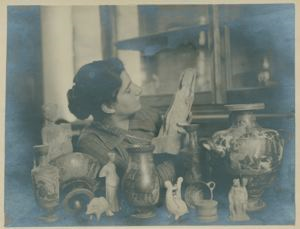 Hetty Goldman
Hetty Goldman (1881â1972) of the Goldman-Sachs family, graduated from Bryn Mawr College in 1903 with a double major in Classics and English. She went on to study archaeology at Radcliffe College, becoming the first woman to win the Eliot Norton Fellowship to study at the American School of Classical Studies at Athens in 1910â11 and earning her PhD in 1916.

Goldmanâs important archaeological work at Tarsus, an excavation supported by Bryn Mawr College from its initial exploratory campaign of 1934 until it closed in 1949, is reflected in the Collegeâs Art & Artifacts collection. Holdings include amphorae, pottery fragments, and sherds Goldman excavated in Tarsus, as well as Goldmanâs files related to this project (see Machteld J. Mellink papers).

The Tarsus Projectâs most celebrated contributions to the field of archaeology are the Neolithic and Mycenaean artifacts found there, but the site was occupied until the Islamic era and beyond. Goldmanâs gift to Bryn Mawr thus consists of artifacts ranging from the Archaic to the Roman Imperial eras of Tarsus. She also donated watercolor illustrations that Piet de Jong made of various artifacts discovered at Tarsus; Goldman is among the archaeological figures de Jong famously caricatured (Knossos Trust archive).

Goldmanâs three-volume publication on her excavations at Tarsus remains indispensable for archaeologists trying to link the Euphrates Basin with Anatolia. In 1936, she became the first woman appointed to the Institute for Advanced Study, a position she held until her retirement in 1947. In 1966, she became the second recipient of the Archaeological Institute of Americaâs highest award, the Gold Medal for Distinguished Archaeological Achievement.

Objects donated by Hetty Goldman
Browse as a List

Byzantine Bronze Follis of Antioch Issued by Constantine I C.807

Byzantine Bronze Follis of Antioch Issued by Constantine I C.806

Byzantine Pentanummia of Antioch Issued by Justin I or Justinian I(?) C.812