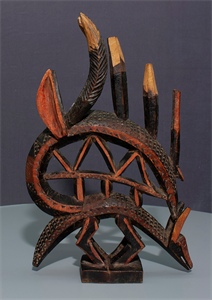 Classification: Ceremonial and Performance Artifacts; Ritual Objects
Culture/Nationality: Bamana, Malian, West African, African
Collection: Neufeld Collection
In preparation for becoming future spouses, Bamana youth in Mali who have reached a certain age-grade are chosen to dance as the male Ci Wara (also spelled Tyi Wara, both pronounced as Chi Wara) and his female companion. The word ci refers to farming while the word wara is generally translated as âwild beast.â In addition to preparing the youth for marriage, it also focuses on the importance of agriculture to the community, since the Bamana believe that theCi Wara taught mankind how to cultivate the land.

This Ci Wara headdress is known as a vertical dance crest because the horns point upward. Horizontal dance crests also exist, with their horns lying back. The triangular cut-outs on the body signify that this is a male Ci Wara.