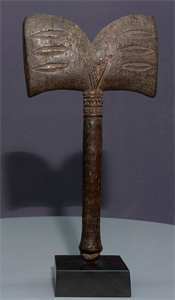 Classification: Ceremonial and Performance Artifacts; Ritual Objects
Culture/Nationality: Yoruba, Nigerian, West African, African
Collection: Neufeld Collection
Description: This double-edged axe of the Yoruba Orisha Shango is referred to as an Edun Ara, and represents Shango's power as the god of thunder. Shango was the king of Oyo, where the facial scarification pattern, or abaja, are sets of three lines, referenced by the sets of three stripes carved onto each side of the blade.

Your current search criteria is: Portfolio is "Mace and Helen Katz Neufeld Collection" and [Object]Display Artist is "Unknown Yoruba".