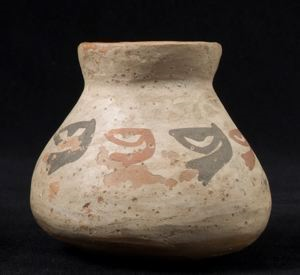 Caches of decapitated heads with holes through which cords could be attached have been excavated at a number of Nasca sites. Called âtrophy headsâ by archaeologists, they are prevalent in Nasca art. Although the uses of the heads cannot be known for certain, a common theory suggests that trophy heads were taken as prizes of warâevidenced by imagery that represents warriors carrying such headsâand then used in rituals to promote agricultural fertility. This is supported by imagery that shows the heads with plants sprouting from their mouths or being held by mythological beings. On this small jar are eyesâan abbreviated form of the trophy head. From the eyes hang forms that could either be the victimâs hair or a carrying cord.

Keywords Click a term to view the records with the same keyword
This object has the following keywords:
eyes*, jars*, miniature*, Nasca, Peruvian*
Additional Images Click an image to view a larger version