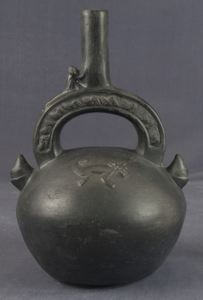 23356_BMC_f_2.jpg
Exhibition List
This object was included in the following exhibitions:
Comparanda List
The following Comparanda exist for this object:

Your current search criteria is: Object is "Stirrup-Spout Bottle with Animal Imagery".