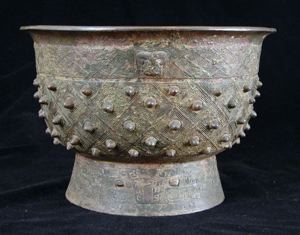 Culture/Nationality: Chinese
Bronze vessels were the most highly valued objects of the Zhou period. These vessels were used in rituals as symbols of power, status, and wealth.

Zhou Dynasty Chinese bronzes were made by piece-mold casting. This method allowed for decorative patterns to be carved or stamped directly on the inner surface of the mold, and thereby permitted sharpness and definition in even the most intricate designs.

This yu, a ritual vessel for food offerings, incorporates many images popular in Shang and Zhou Dynasty bronzes, including taotie (zoomorphic mask) and kui (dragon) motifs, as well as stylized, geometric designs such as the nipples encased in square lozenges that cover the body of the vessel.

Keywords Click a term to view the records with the same keyword
This object has the following keywords:
Asian*, bronzes*, Chinese*, Shang*, yu*, Zhou*
Additional Images Click an image to view a larger version

TN.127_BMC_i.jpg
For a photogrammetry model of this object please contact artandartifacts@brynmawr.edu or see: https://sketchfab.com/3d-models/yu-ritual-food-vessel-12th-11th-cent-bce-a0c70830dd1d4c228e6bbaba42ae3470
Exhibition List
This object was included in the following exhibitions:
Bibliography List
The following Bibliography exist for this object:
Portfolio List Click a portfolio name to view all the objects in that portfolio
This object is a member of the following portfolios: