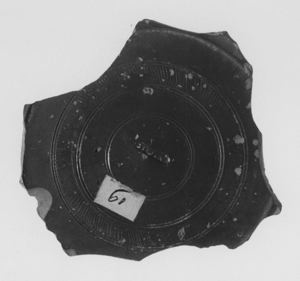 Keywords Click a term to view the records with the same keyword
This object has the following keywords:
graffiti art*, plates*, sherds*, stamping*, Terra sigillata*, vessels*
Additional Images Click an image to view a larger version

P.2166_BMC_a_3.jpg
Dimensions
Portfolio List Click a portfolio name to view all the objects in that portfolio
This object is a member of the following portfolios:

Your current search criteria is: Object is "Arretine Terra Sigillata Plate Base Fragment".