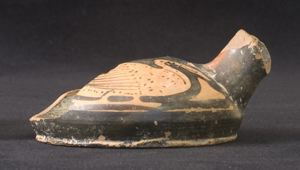 Classification: Containers and Vessels; Vessels; Askoi
Keywords Click a term to view the records with the same keyword
This object has the following keywords:
Ancient Greek*, askoi*, Red-figure*, vase paintings*
Additional Images Click an image to view a larger version

P.1000_BMC_t.jpg
Dimensions
Related Publications Click for more information
Bibliography List
The following Bibliography exist for this object:
Portfolio List Click a portfolio name to view all the objects in that portfolio
This object is a member of the following portfolios:

Your current search criteria is: Portfolio is "Other Greek Pottery" and [Object]Period/Era/Dynasty is "Classical-Hellenistic".