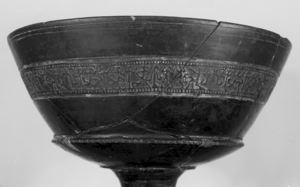 Your current search criteria is: Object is "Etruscan Bucchero Chalice with Band of Relief Figural Decoration".