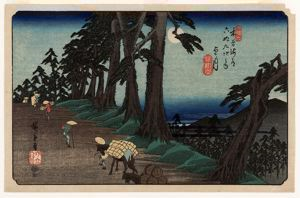 This work is twenty-sixth in the series "Sixty-Nine Stations of the Kisokaido," which was illustrated jointly by Hiroshige and Ikeda Eisen. In this work, Hiroshige represents a section of the mountain road between Edo and Kyoto, where the imperial horses were pastured in the summer before their return to the court at the first autumnal full moon.