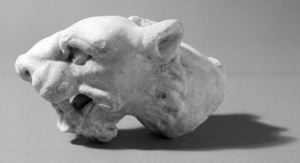 Your current search criteria is: Object is "Roman Panther Head from a Marble Sarcophagus(?)".