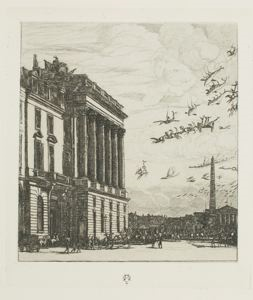 This etching was produced approximately a decade after his series "Eaux-fortes sur Paris" and is one of his final works depicting the city. It shows the Place de la Concorde, with the French Naval Ministry under attack from fantastic flying creatures. The scene has been interpreted as the product of lingering resentment Meryon experienced for the Minister of the Marine â a result of an earlier offense during his naval career, in conjunction with the artistâs increasing mental instability towards the end of his life. The print hung in the Blue Room of the Deanery along with other prints by Meryon and etchings of the American artist, James McNeill Whistler.

Keywords Click a term to view the records with the same keyword
This object has the following keywords:
architecture, etchings*
Additional Images Click an image to view a larger version