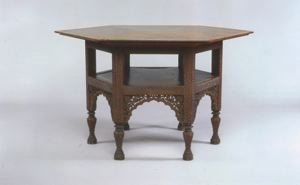 Classification: Furnishings and Furniture; Furniture
Culture/Nationality: American
Collection: Deanery Collection
Description: Lockwood de Forest (1850-1932) was an American-born artist who is most well-known for his landscape painting and interior design, as well as for his partnership with Louis Comfort Tiffany and the Associated Artists in New York. As a young man he travelled frequently with his family, touring Europe, North Africa, and parts of the Middle East before the age of 25, but his greatest interest was in the decorative arts of Eastern India. De Forest spent many years in Ahmedabad overseeing a workshop where craftsmen produced carved furniture, tracery panels, jewelry, and textiles for export to New York City.

Keywords Click a term to view the records with the same keyword
This object has the following keywords:
Arts and Crafts*, carvings*, hexagonal*, Indian*, tables*, wood*
Additional Images Click an image to view a larger version