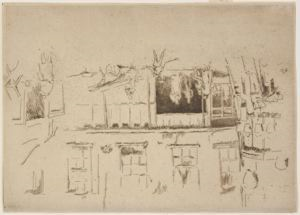 Although this etching depicts an English subject â a courtyard along Drury Lane in London, it was published in 1886 with a series of twenty-six etchings known as the âSecond Venice Set.â Whistlerâs characteristic signature â a monogram of his initials within an abstract butterfly â appears on a wall, between the windows at the upper right. This print likely hung on the second floor of the Deanery, while other etchings by Whistler were located in M. Carey Thomasâ study, the Blue Room.

Deanery.218_BMC_f.jpg
Exhibition List
This object was included in the following exhibitions:
Bibliography List
The following Bibliography exist for this object:
Related Object(s) Click a record to view

Your current search criteria is: Object is "Little Court".