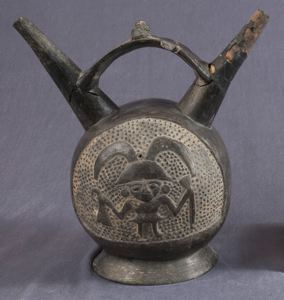 Very few ChimÃº vessels were painted; more commonly, seals or stamps were pressed into the clay for decoration. This example displays a stamped design of a frequently represented deity known as the Staff God, whose significance is unknown.

Keywords Click a term to view the records with the same keyword
This object has the following keywords:
clay*, Late Intermediate Period*, Peruvian*
Additional Images Click an image to view a larger version

D.330_BMC_r_2.jpg
Exhibition List
This object was included in the following exhibitions:

Your current search criteria is: Object is "Double Spout and Bridge Bottle".