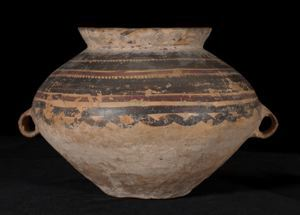 Culture/Nationality: Chinese
This Neolithic pot displays the skill of Yangshao potters, who produced some of the earliest painted ceramics in China. The Yangshao archaeological culture consisted of hundreds of settlements in the region of the Yellow River and Wei River and stretched across the northwestern plains from Shaanxi province in central China to Gansu province in the west.

The black and purple designs on this pot are typical of ceramic decoration from the Yangshao period. Made from coils of clay that were stacked and smoothed, this pot has the balanced form, wide mouth, and swelling silhouette that are characteristic of the era.

Keywords Click a term to view the records with the same keyword
This object has the following keywords:
Asian*, Chinese*, handles*, pots*, pottery*, Yangshao*
Additional Images Click an image to view a larger version