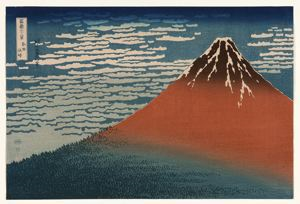 Classification: Fine and Visual Arts; Prints; Woodcuts
Culture/Nationality: Japanese
Description: Hokusai's Red Fuji is one of the most famous images of Japan's highest, most sacred mountain. The image is part of the series, Thirty-Six Views of Mount Fuji, and depicts the tones of the rising sun and morning sky through simple lines and colors. The artist's works departed from the traditional themes of the ukiyo-e genre, such as scenes of entertainment and everyday life, and helped to create a resurgence of interest in travel and landscape. Hokusai's ability to distill and represent the essence of a landscape gained him the admiration of many Western impressionist and post-impressionist painters.