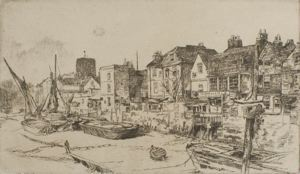 Classification: Fine and Visual Arts; Prints; Etchings
Culture/Nationality: American
Collection: Deanery Collection
Description: James Whistler (1834-1903) was born in Lowell, Massachusetts; in his youth he studied art in St. Petersburg, London, and Paris, settling in France after a short career as a draftsman for the U.S. Coast Survey. Although he is known primarily for his paintings, Whistler also produced numerous etchings, lithographs, and drypoints.