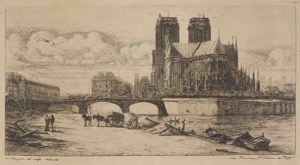 "LâAbside de Notre Dame" is commonly considered the masterpiece of the series. It is a view of Notre Dame de Paris from the southeast, with the Pont de lâArchevÃªchÃ© in the middleground and boats, people, and a horse-drawn carriage on the riverbank. Meryonâs skill in rendering architecture is evident in this etching, particularly in the play of light and shadow on the exterior of the cathedral. This print hung in the Blue Room of the Deanery along with other prints from the same series and etchings of the American artist, James McNeill Whistler.

Keywords Click a term to view the records with the same keyword
This object has the following keywords:
etchings*
Additional Images Click an image to view a larger version