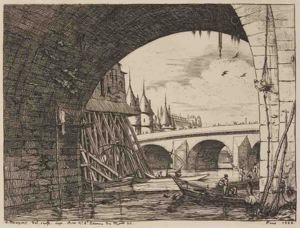 This etching, a view of the Seine river under an arch of the Pont Notre Dame, illustrates the technical mastery and mysterious atmosphere that characterize Meryonâs work. It hung in the Blue Room of the Deanery along with other prints from the same series and etchings of the American artist, James McNeill Whistler.

Keywords Click a term to view the records with the same keyword
This object has the following keywords:
etchings*
Additional Images Click an image to view a larger version