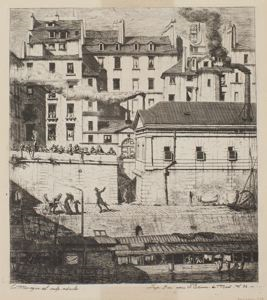 In the majority of his etchings, Meryon treats human figures as subsidiary elements in the urban landscape. The figures in "La Morgue," however, relate a narrative: a body recently dredged from the river is taken to the city mortuary, as spectators watch from the wall. The scene takes place in an architectural setting depicted with characteristic clarity and imagination. This print hung in the Blue Room of the Deanery along with other prints from the same series and etchings of the American artist, James McNeill Whistler.

Keywords Click a term to view the records with the same keyword
This object has the following keywords:
drypoint*, etchings*
Additional Images Click an image to view a larger version

Deanery.229_BMC_f.jpg
Bibliography List
The following Bibliography exist for this object:
Portfolio List Click a portfolio name to view all the objects in that portfolio
This object is a member of the following portfolios:

Your current search criteria is: Object is "La Morgue".