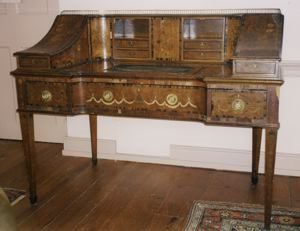 This satinwood desk belonged to Mary Elizabeth Garrett and was likely brought from her Baltimore, Maryland, home when she moved into the Deanery in 1904. The desk has an open front with cabinet ends, a rounded back, and a brass gallery rail top, and it is elaborately inlaid with various colored woods.

In archival photographs, the desk as well as several Queen Anne-style side chairs â all likely dating to the 18th century â can be seen in Garrettâs bedroom on the second floor of the Deanery.

Keywords Click a term to view the records with the same keyword
This object has the following keywords:
Adam Style*, brass*, desks*, marquetry*, satinwood*, secretaries*
Additional Images Click an image to view a larger version

Deanery.459_BMC_f_2.jpg
Bibliography List
The following Bibliography exist for this object:
Portfolio List Click a portfolio name to view all the objects in that portfolio
This object is a member of the following portfolios:

Your current search criteria is: Object is "Carlton House Desk".