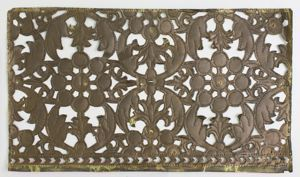 These pieces of decorative metalwork, in rectangular, paisley, and âpeacockâ designs, were installed between the exposed beams of the ceiling in M. Carey Thomasâs sitting room, known as the Dorothy Vernon Room. The room was modeled after one in Haddon Hall, Derbyshire, England, which Thomas had visited numerous times while she was a student, traveling in Europe. De Forest designed the room as a mixture of English and East Indian design, although Japanese teakwood tables and Tiffany lamps were used in the room as well. After the Deanery was razed in 1968, a new Dorothy Vernon Room was installed in Haffner Hall, about a quarter size of the original room, where many of the stencils, furniture, and other furnishings were re-located.

De Forest began producing brass stencils like these in 1881, using a pattern book supplied by the director of his Ahmedabad workshop, Mr. Muggenbhai Hutheesing. The workshop produced close to 200 different filigree designs, continuing after 1889 under the direction of Hutheesingâs two sons.

Additional Images Click an image to view a larger version

Your current search criteria is: Object is "Pierced Decorative Metalwork from the Deanery".