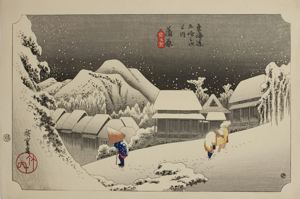 2012.4.13_BMC_f_2.jpg
Dimensions
Portfolio List Click a portfolio name to view all the objects in that portfolio
This object is a member of the following portfolios:

Your current search criteria is: Object is "Kanbara: Night Snow (Kanbara, yoru no yuki), second state, from the series Fifty-three Stations of the TÃ´kaidÃ´ Road (TÃ´kaidÃ´ gojÃ»san tsugi no uchi), also known as the First TÃ´kaidÃ´ or Great TÃ´kaidÃ´".