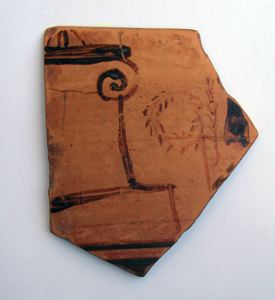 Classification: Containers and Vessels; Vessels
Culture/Nationality: Boeotian
Findspot: Originally from the site of the Cabeiron near Thebes in Boeotia (per catalogue card).
Hoppin's inventory list describes both P.217.a and P.217.b as belonging to a Caberion vase.

Keywords Click a term to view the records with the same keyword
This object has the following keywords:
Black-figure*, Boeotian*, Cabiran*, Classical*, Kabeiric*, vase paintings*
Additional Images Click an image to view a larger version

P.217.b_BMC_f.jpg
Provenance History
Portfolio List Click a portfolio name to view all the objects in that portfolio
This object is a member of the following portfolios: