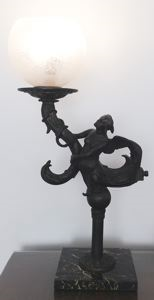 One of a pair of bronze electroliers (electric chandeliers) that consist of a flat marble base, figural bronze stems, and glass shades. The main supports are composite creatures that appear to be early-twentieth-century reinterpretations of an ancient sphinx, with their female torso and head, wings of a bird, haunches of a lion, and snake-like tail. They are perched on balls with columnar pedestals and hold vegetal scrolls with entwined snakes. The scrolls twist up into flat plate bases for the glass lampshades.

Each of the round glass shades is etched with three small scenes and a wave decoration that encircles the top and bottom of each vignette. The decoration is reminiscent of ancient Greek vase painting with respect to design, style, and subject matter. Both shades are decorated with the same three scenes. In the first a two-horse chariot is being driven by a man with a spear who, based on the style of his sleeves and pointed hat, appears to be an ancient Persian. The second scene depicts two rearing horsesâone with a rider and the other being led. The men are most likely Greek, with their short hair, tunics, and spears. In the third scene two men riding horses toward the left: one appears to be Greek, with tunic, greaves, and plumed helmet; the other is most likely Persian, with his cloak, pants, and pointed cap.

The introduction of electricity to chandeliers produced the term electrolier (electric chandelier). This pair was installed in a stairwell in the Deanery; later they were rewired and attached to marble bases with crystal shades to serve as table lamps in the Deaneryâs Dorothy Vernon Room.

W.58_BMC_f_2.jpg
Exhibition List
This object was included in the following exhibitions:
Bibliography List
The following Bibliography exist for this object:
Related Object(s) Click a record to view

Bronze Electrolier
W.57
Portfolio List Click a portfolio name to view all the objects in that portfolio
This object is a member of the following portfolios:

Your current search criteria is: Object is "Bronze Electrolier".