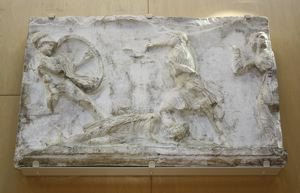 Late 19th-century casts of originals from the 350s BCE

These plaster casts of Greek reliefs in the British Museum were part of the teaching collection of Bryn Mawr College in the 19th century; most were displayed in Taylor Hall. When Rhys Carpenter Library was built in the 1990s, it was decided to retrieve these reliefs from storage and display them along with names of notable faculty from the History of Art and Classical and Near Eastern Archaeology departments.

The Maussolleion (the tomb of Maussollos) in Halikarnassos (modern Bodrum) was first excavated by the British in 1856. Maussollos was satrap of Karia, a region of western Turkey, where he ruled until 353 BCE. He was succeeded by his sister and wife Artemisia, who died in 351, and was also buried in the Maussolleion, which was considered one of the Seven Wonders of the Ancient World and was adorned by relief and free-standing sculpture, of which these casts are a small number. The tomb was completely destroyed by earthquakes in the middle ages, and much of the stone from the tomb, including the relief sculpture, was incorporated into the Castle of St. Peter, built by the Knights of St. John in the 15th century. Despite descriptions of the Maussolleion by the Roman authors Pliny and Vitruvius, many reconstructions of the building have been proposed.

Rhys Carpenter Library Atrium
Keywords Click a term to view the records with the same keyword
This object has the following keywords:
Amazons, casts*
Additional Images Click an image to view a larger version

Your current search criteria is: Object is "Amazonomachy Relief from the Mausoleum of Halicarnassus".