Model of the Acropolis in Athens in 1895 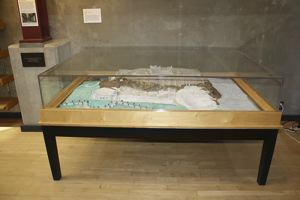 Model of the Acropolis in Athens in 1895


The Committee on Casts for the Metropolitan Museum of Art commissioned this model of the Athenian Acropolis, which shows all the latest archaeological discoveries of the late nineteenth century. German archaeologist Ernst Curtius recommended the artist to the Committee, and Curtius and others (archaeologists Wilhelm DÃ¶rpfeld and Georg Kawerau, and the topographer Heinrich Kaupert) advised Walger on the model, which was completed in 1895. Within a few years, versions of the model, like this one, were part of the collections of museums and colleges throughout the United States and Europe.
The metope, one of the best-preserved of the Elgin Marbles taken to the British Museum in the early 19th century, is from the south side of the Parthenon, and depicts a battle between a Lapith and a Centaur.

Rhys Carpenter Library Atrium
Keywords Click a term to view the records with the same keyword
This object has the following keywords:
acropolises*, casts*
Additional Images Click an image to view a larger version

Your current search criteria is: Object is "Model of the Acropolis in Athens in 1895".