Screen with Scene from the Tale of Genji 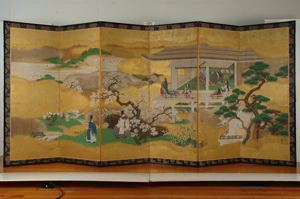 Screen with Scene from the Tale of Genji

This is an early nineteenth century screen by Kano Seisen'in Osanobu (1796-1846). As indicated by the signature "Seisen Hogen Osanobu hitsu," the work was completed between 1819 and 1834, the years the artist was awarded the honorary court titles of hogen and hoin. As the last great master of the Kano school, Osanobu attached great importance to the study of classical paintings and reproduced a large number of ancient Chinese and Japanese paintings, not least of which included the reconstruction of Edo Castleâs decorative program in 1845. The vibrant six-fold Osanobu screen in Bryn Mawrâs collection is a beautiful example of the artistâs adept homage and adaptation of classical conventions. Made at the height of the Osanobuâs career, this work draws on the traditions of the Kano and Tosa schools to illustrate a key moment from Genji Monogatari.

The subject of Osanobuâs screen is the fifth chapter from the Tale of Genji. In this depiction of Wakamurasaki, âthe shining princeâ is shown at the center of the golden byobu design. Dressed in white and standing under a cherry tree in full bloom, Genji and his male companion seem to be enjoying the beauty of the surrounding deep green hills and a nearby cascading waterfall. Concealed by the cherry bough, Genji gazes up at a charming scene. The prince is covertly and attentively observing a group of lavishly dressed women in an expansive interior. On the balcony of this courtly home, a beautiful young girl peers into the landscape as she mourns the flight of her pet sparrow. As the narrative goes, this is the first moment that Genji sees his future beloved Murasaki. The high angular perspective of the composition and the unobstructed fukinuki yatai view of the interior provide us with a privileged vantage point from which to admire the scene. Osanobu's use of thick black ink and fine detail in his rendering of Murasakiâs features create a focal point in the screenâs imagery. As the viewerâs eye is drawn through the composition by the striking gold-leaf and brilliant pigments, the viewerâs gaze, like Genjiâs, circles back to appreciate the beauty of the young Murasaki. The execution and arrangement of the work are dynamic and striking.

Keywords Click a term to view the records with the same keyword
This object has the following keywords:
folding screens*, Japanese*, Kano School*
Additional Images Click an image to view a larger version

Your current search criteria is: Object is "Screen with Scene from the Tale of Genji".