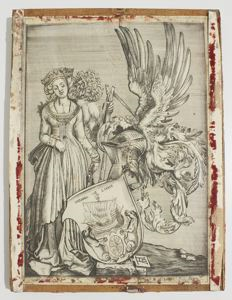 Keywords Click a term to view the records with the same keyword
This object has the following keywords:
armors*, coats of arms*, dentin*, folklore*, marriage*, nobility*, shields*, weddings*, wings*
Additional Images Click an image to view a larger version

Coat of Arms with Skull

Your current search criteria is: Object is "Engraved Ivory Wedding Gift for Isabella Gonzaga after the 1503 Albrecht Durer Engraving "Coat of Arms with a Skull".