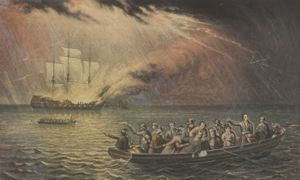 Destruction of the Tanjore by Lightening off Ceylon

Your current search criteria is: Related to "George Baxter".