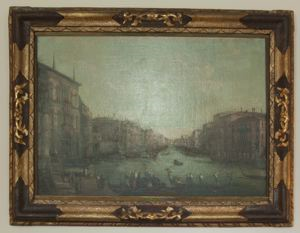 A Regatta on the Grand Canal

This painting depicts a regatta on the Grand Canal in Venice. The canal comes in on the right side of the painting and curves into the distance, its shores densely populated by buildings, docks, and boats. Several buildings have colorful fabric hanging from their balconies. One can see two gondoliers racing their gondolas down the center of the canal. Two larger boats with many rowers and elaborate decoration look on from either side. The landing on the right has several people standing on it, including a figure overlooking the scene from a low balcony. Four gondolas with rowers and well-dressed passengers are stopped near the landing in the foreground.

Your current search criteria is: Related to "Canaletto" and [Object]Display Artist is "Canaletto".