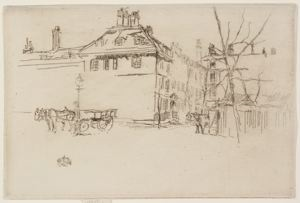 "The Temple" originally dates from late 1880 or early 1881, and although it depicts the site of two of the Inns of Court in London, it was first published in 1886 with a series of twenty-six etchings known as the âSecond Venice Set.â The etching depicts a winter scene: a horse-drawn cart passes through a large, empty town square bordered by several tall buildings and a stable. Whistlerâs characteristic signature â a monogram of his initials within an abstract butterfly â appears at the lower left. This print likely hung on the second floor of the Deanery, while other etchings by Whistler were located in M. Carey Thomasâ study, the Blue Room.

Deanery.219_BMC_f_2.jpg
Exhibition List
This object was included in the following exhibitions:
Dimensions
Bibliography List
The following Bibliography exist for this object:
Related Object(s) Click a record to view