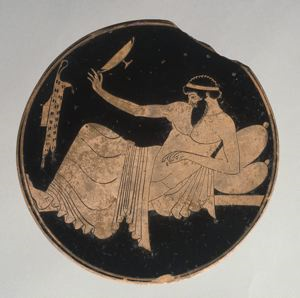 
Inscription (complete): ÎÎ Î ÎÎÎ£ ÎÎÎÎÎ£ ( The boy is beautiful
Location of inscription: Red Letter, Written in retrograde stretching from above his head to his shin. Above the symposistâs head and raised arm, ÎÎ Î ÎÎÎ£, below his outstretched hand and along the knee, ÎÎÎÎÎ£.

Your current search criteria is: Portfolio is "Attic Pottery" and [Object]Country of Creation is "Greece" and [Object]Object Type Sub 1 is "Vessels" and [Object]Culture-Nationality is "Greek".