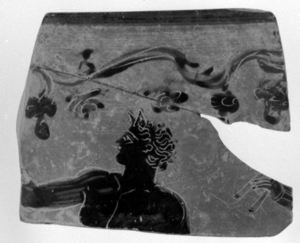 Classification: Containers and Vessels; Vessels; Kantharoi
Culture/Nationality: Boeotian
Findspot: Hoppin's inventory list describes the sherd as a fragment of a Caberion vase and so it is probably from the site of the Cabeirion near Thebes in Boeotia.

Your current search criteria is: Portfolio is "Other Greek Pottery".