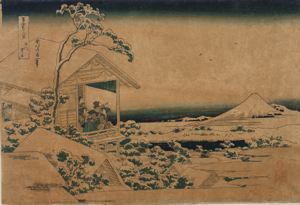 Snowy Morning at Koishikawa (Koishikawa yuki no ashita), from the series Thirty-six Views of Mount Fuji (Fugaku sanjÃ»rokkei)
X.1026
Portfolio List Click a portfolio name to view all the objects in that portfolio
This object is a member of the following portfolios: