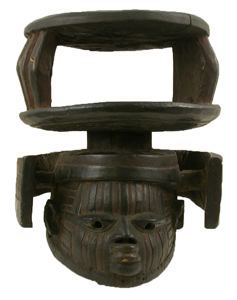 Carved and drilled wood with pigment and patina

Classification: Ceremonial and Performance Artifacts; Masks
Culture/Nationality: Yoruba, Beninese, West African, African
Collection: Neufeld Collection
Gelede masks are used in Yoruba society to honor mothers in both the spiritual and living realms. The Yoruba ascribe spiritual, mystical, and magical powers to mothers, who are able to bestow either blessings or curses. As holders of the secret of life, older women are deemed perhaps even more powerful than ancestors or gods.

These masks are used during the annual Gelede ceremonies, which often coincide with the beginning of the agricultural season and are performed to pay tribute to the special power of women and to ensure the well-being of the entire community.

This mask portrays calmness and composure, qualities valued in older women, while the lateral facial bands are associated with scarification patterns, a sign of cultural identity.

Your current search criteria is: Portfolio is "Mace and Helen Katz Neufeld Collection".