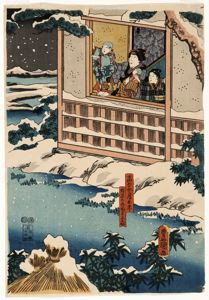 Prolific ukiyo-e woodblock artist Kunisada is known for his work on traditional themes of middle-class life and entertainment. His most famous works portray actors and scenes from kabuki plays, including this print, which illustrates a scene from Sakura Giminden, an eighteenth-century play written about a legendary folk hero.

In this story, Sogo, the headman of a small village, defies the law and makes a direct appeal to the shogun about his village's harshly high taxes. The village is granted relief but Sogo, his wife, and his children are all executed for his offense. In this scene, Sogo's family bids him a final, emotional farewell as he leaves to make his fateful appeal to the shogun.

Your current search criteria is: Portfolio is "Asian Prints" and [Object]Century is "18th century, 19th century" and [Object]Display Artist is "Utagawa Kunisada".