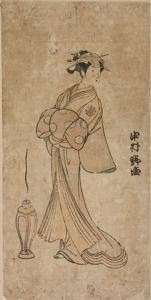 The Actor Nakamura Noshio I as the Spirit of the Courtesan Takao, in the Shosagoto Dance Sequence "Sono Utsushi-e Matsu ni Kaede" (A Shadow-Picture of Pine and Maple), the Last Scene of Part Two of the Play "Keisei Momiji no Uchikake" (Courtesan in an Ove

X.1078_BMC_f_2.jpg
Dimensions
Portfolio List Click a portfolio name to view all the objects in that portfolio
This object is a member of the following portfolios: