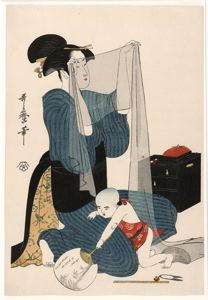 Reproduction of uncertain date, after original of c.1794-1795

This print, part of a triptych that shows several women engaged in needlework, highlights the innovation and style of celebrated woodblock print artist Kitagawa Utamaro. The artist's originality is shown through the representation of the sheer cloth, an effect he developed by attaching textured gauze or grains of sand to the woodblock instead of carving it (nunomezuri). His style is revealed by the sensitive depiction of mother and child and the idealized faces and forms of the pair.

Utamaro was one of the ukiyo-e artists who were most famous outside Japan. His "pictures of the floating world" (representations of the lifestyle and entertainment of the emerging middle class) served as inspiration to such artists as Cassatt, Manet, and Degas.