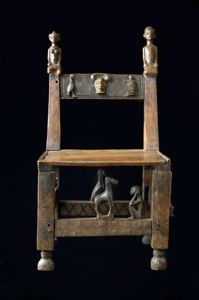 Dating back to the seventeenth century, this style of chair comes out of the carving traditions of the Chokwe of Angola. The head on the back, adorned with a chieftainâs headdress, may indicate that it was once a throne.

Your current search criteria is: Object is "Ngundja (Ceremonial Chair)".