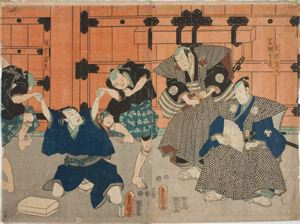 2007.9.8_BMC_f_2.jpg
Dimensions
Portfolio List Click a portfolio name to view all the objects in that portfolio
This object is a member of the following portfolios:


Your current search criteria is: Object is "The Actors Morita Kan'ya XI as Ãsawa Hayato, Nakayama IchizÃ´ I as Iwabuchi Genba (R), and Ichikawa Kodanji IV as Asakura TÃ´go (L) ".