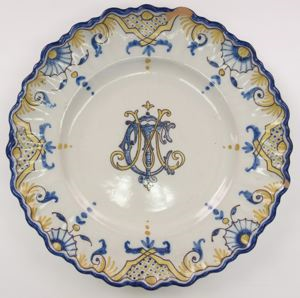 This set of monogrammed china â originally a total of 25 plates â was commissioned by M. Carey Thomas from the workshop of the Italian Montagnon family. The workshop was founded in the city of Nevers, France, in the late 16th century and continued to operate into the late 19th century under the ownership of Antoine Montagnon. The signature on the back of the plates identifies Antoineâs son, Gabriel, as the creator of this set of dishes.

Keywords Click a term to view the records with the same keyword
This object has the following keywords:
ceramic*, dinner plates*, French*, monograms*, plates*
Additional Images Click an image to view a larger version

2013.5.1_BMC_r_2.jpg
Exhibition List
This object was included in the following exhibitions:
Related Object(s) Click a record to view

MCT Monogrammed Plate
2013.5.9
Portfolio List Click a portfolio name to view all the objects in that portfolio
This object is a member of the following portfolios:

Your current search criteria is: Object is "MCT Monogrammed Plate".