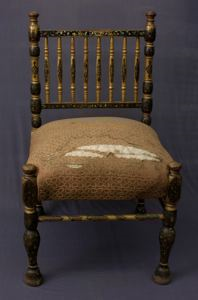 This side chair is one of a pair with Deanery.371 and part of a set with another pair of side chairs, Deanery.369 and Deanery.370. Its frame is gilt and decorated with raised enamel floral designs. The banister back of the chair has eight spindles. The turned stiles have mushroom finials, and its turned legs end in bell-shaped feet.

Deanery.372_BMC_f_2.jpg
Exhibition List
This object was included in the following exhibitions:
Bibliography List
The following Bibliography exist for this object:
Related Object(s) Click a record to view

Side Chair
Deanery.371
Portfolio List Click a portfolio name to view all the objects in that portfolio
This object is a member of the following portfolios: