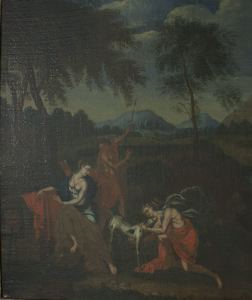 
Bryn Mawr College
Accession Number: W.149
Classification: Fine and Visual Arts; Paintings; Oil Paintings
Description: This painting depicts a landscape with three classicizing figures and small dog. The three figures, one female and two male, wear Greek-inspired clothing â sandals with straps and loose, flowing garments. The two figures in front also carry quivers full of arrows over their shoulders. The man on the right kneels to pet a white dog with black spots as his grey-blue cloak billows out behind him. The woman on the right is perched next to a fountain. She is draped in several different colored fabrics and red straps cross her bare chest. The fountain consists of plain, squared-off blocks with water spouting from the mouth of a carved face into a small pool on the ground. The second male figure standing slightly behind the others gestures with a spear in hand to the landscape in the distance, which consists of fields, trees, and mountains.

One of the happier moments of the tragic Greco-Roman myth of Procris and Cephalus is the subject of this painting. Several ancient versions exist, including two versions by the Roman poet, Ovid. In later periods, the storyâs value was in its discussion of the virtues of marital fidelity and trust, which as a result lent itself as a common theme for plays presented at weddings in the 15th century.

Here we see one of the reconciliations between the couple in their troubled marriage, which was fraught with questions of faithfulness and trust. Cephalusâ test of his wifeâs fidelity proved her to be an adulteress, so she fled. The couple is eventually reconciled through the assistance of a shepherd and gifts from the goddess Diana or King Minos. The huntress Procris, identified by her quiver full of arrows, presents her husband with two gifts as peace offerings, an infallible hunting dog named Leilaps and an unerring spear. Cephalus bends to greet Leilaps as the shepherd holding the spear and Procris look on.

Your current search criteria is: Keyword is "BCXQR" and [Object]Century is "18th century, 19th century".